These two bills -- Assembly Bill 2011, known as the “Affordable Housing and High Road Jobs Act of 2022,” and Senate Bill 6, known as the “Middle Class Housing Act of 2022” – were the result of lengthy negotiations among California’s lawmakers, residential developers, construction trade unions, and local governments. Like much of California’s recent housing legislation, the bills override local zoning regulations – in this instance to allow residential development in commercial zones that would otherwise prohibit residential uses.

The bills present different tradeoffs. For example, AB 2011 provides a streamlined process and requires the local government to approve a qualifying project on a ministerial basis, making the project exempt from CEQA. However, AB 2011 requires the developer to include below market rate affordable units, pay prevailing wages to all construction workers and, under some circumstances, make a relocation payment to a displaced commercial tenant.

Although SB 6 does not have a streamlined ministerial process, it does not require the developer to include affordable units. However, like AB 2011, SB 6 requires the developer to pay prevailing wages to construction workers and make a relocation payment to a displaced commercial tenant. In addition, SB 6 requires that all construction contracts meet “skilled and trained workforce” requirements for construction workers, which, in practical terms, will likely require the majority of contractors and subcontractors performing work to be signatory with the construction trades unions.

The following table highlights the major differences between the two bills: 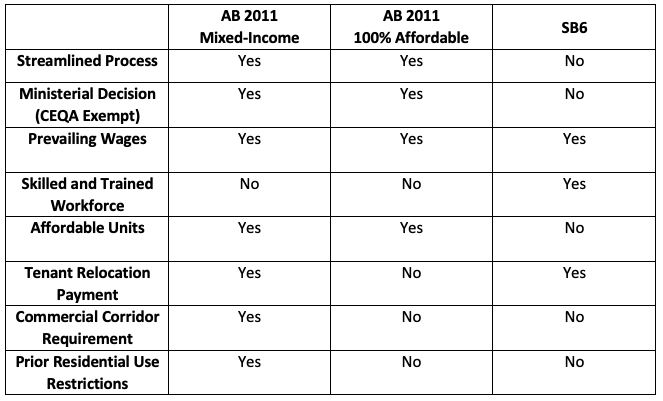 The bills’ requirements may make it difficult for many projects to take advantage of the legislation. However, with underperforming or obsolete retail and office projects continuing to face economic challenges, there may be good opportunities to build residential projects in some commercial areas. Both AB 2011 and SB 6 are important tools that residential developers should consider when evaluating residential development on commercial properties. For projects that can accommodate the construction labor and other requirements under AB 2011 or SB 6, these bills can be a key element of a developer’s land use entitlement strategy.

The following are high-level summaries of the key provisions of AB 2011 and SB 6. Both bills are quite detailed and will require careful project-by-project evaluation to ensure a project qualifies.

If the local government determines that a project submitted pursuant to AB 2011 is consistent with the objective planning standards, it must approve the project, and the approval is ministerial and therefore not subject to CEQA.

If the local government fails to provide the required determination within these timeframes, then the project is deemed to satisfy the required objective development standards.

The local government’s design review process is limited to objective design criteria and is also subject to specified timelines:

SB 6 does not provide a streamlined ministerial approval process.

SB 6 does not require any affordable housing to be included in the project.

One of the most important aspects of the two bills for developers is the required construction labor standards.

To qualify as an AB 2011 project (whether 100% affordable or mixed-income), a developer must ensure that all construction workers are paid prevailing wages (other than apprentices in certain programs who may be paid the applicable apprentice prevailing rate) as established under California’s Prevailing Wage Law.

Many of these labor requirements can also be satisfied if the construction worker is covered by a collective bargaining agreement or if the contractor is party to a project labor agreement.

SB 6 also requires extensive reporting, certification and monitoring requirements and provides for robust enforcement and penalties. SB 6 exempts some reporting and enforcement provisions and other requirements if the project is covered by a project labor agreement with specified provisions.

Because commercial zones in many jurisdictions do not allow residential uses and therefore do not prescribe residential density or height standards, both AB 2011 and SB 6 provide a methodology for establishing those standards. Under AB 2011, different methods apply depending on whether the project is 100% affordable or includes a mix of market rate and affordable units. 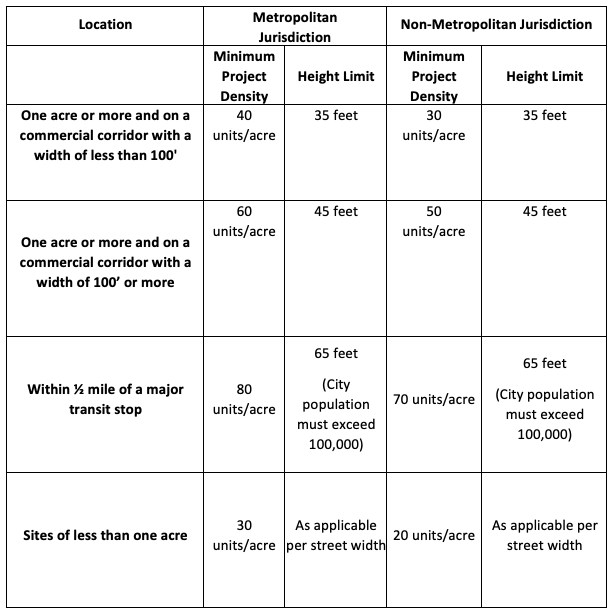 100% Affordable Projects. AB 2011 prescribes a different method for determining density for a 100% affordable project. The density must meet or exceed the default density under housing element law as appropriate to accommodate housing for low income households. Generally, these densities are:

SB 6 uses the same density methodology as the 100% affordable project under AB 2011 described above.

AB 2011 requires the project to meet the objective zoning, subdivision and design standards that are in effect at the time the development application is submitted to the local government. The applicable standards are different for mixed-income and 100% affordable projects.

For 100% affordable projects, the objective standards will be those for the zone that results in the greater density between: (i) the existing zoning designation if it allows multifamily use, or (ii) the zoning designation for the closest parcel that allows residential use at the density permitted by AB 2011, as discussed above.

Under SB 6, an eligible project is subject to the local zoning, parking, design and other ordinance and procedures applicable to the zone that allows for housing with the minimum density required. The project must also comply with all objective local requirements, other than those that prohibit residential use, or allow residential use at a density lower than established under SB 6.

Qualifying commercial tenants that would be displaced by a project using SB 6 or a mixed-income project under AB 2011 are entitled to receive a relocation payment from the developer. The two bills include identical commercial tenant provisions.

To be eligible, the tenant must (i) be independently owned and operated with its principal office in the same county as the leased property; (ii) employ 20 or fewer employees; (iii) have annual average gross receipts under $1,000,000 for the three year period that precedes the expiration of its lease; (iv) still be in operation on the site at the time its lease expires; and (v) its lease needs to have expired within the three years following the development application submittal and not be renewed by the property owner. A tenant that had not previously entered into a lease on the project site yet enters into one following submission of the development application is ineligible for relocation payment, even if it otherwise meets the eligibility criteria.

The amount of the relocation payment varies depending on the length of time the tenant has been operating on the project site. The payment begins at 6 months’ rent for those on the site for at least one year but less than 5 years. The payment increases with an additional three-months’ increment of rent for each additional five-year lease term. The payment is capped at the equivalent of 18 months’ rent for those tenants on the site for 20 years or more. The amount of the monthly rent is one-twelfth of the total amount paid by the tenant in the last 12 months. The relocation payment must be made upon expiration of the tenant’s lease.

The tenant must use the relocation assistance to relocate its business or for costs of a new business. If the tenant elects not to use the funds for these purposes, then the developer would only need to pay the equivalent of 3 months’ rent regardless of the amount of time the tenant has been operating on the project site.

Requirements for Mixed-Income and 100% Affordable Projects:

To satisfy these requirements, the project must:

To meet these requirements, the project must:

AB 2011 provides that the local governments may not require parking in mixed-income projects, but may apply standards for bicycle parking, electrical vehicle charging equipment, and parking accessible to persons with disabilities.

The qualifications for a project under SB 6 are considerably simpler than under AB 2011. The project must:

Under AB 2011, a local government may exempt a parcel from AB 2011 before a developer submits a development application on the parcel if the local government identifies alternative sites for residential development and makes prescribed written findings. These findings include, for example, that the alternative development would result in (i) no net loss of the total potential residential density in the jurisdiction, (i) no net loss of the potential residential density of housing affordable to lower income households in the jurisdiction, and (iii) affirmative furthering of fair housing.

In using entitlement pathways under AB 2011 and SB 6, developers may also be able to leverage the benefits of other laws intended to streamline residential development, particularly the Housing Accountability Act. AB 2011 projects already meet the affordable housing requirements to use the density bonus, incentives, concessions and waivers of development standards under the state Density Bonus Law. By including the minimum number of affordable units under the Density Bonus law, a project under SB 6 will be eligible for incentives, concessions and waivers, as well.

AB 2011 and SB 6 are lengthy and complicated and contain nuances that are beyond the scope of this summary. If you would like to know more about these bills or other laws affecting housing and mixed-use development, please contact any of our experienced land use attorneys.